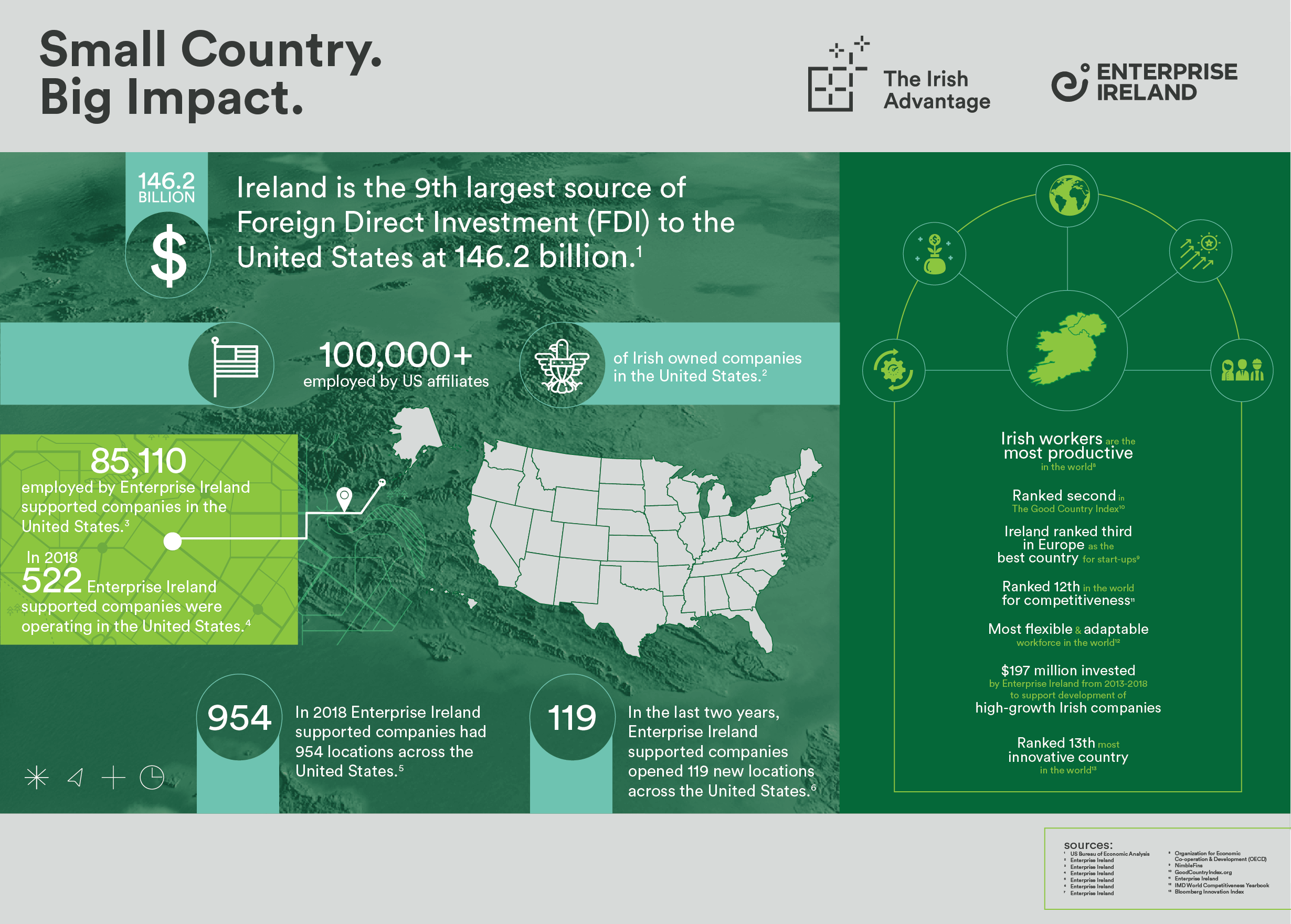 100,000 People in The United States are employed by over 520 Irish Companies

Ireland is now the ninth largest source of foreign direct investment into the United States at $146.2 billion. This is according to the United States Bureau of Economic Analysis. Additionally, in 2018, Enterprise Ireland-supported companies opened 60 new operations in the U.S.

On March 13th, An Taoiseach (Irish Prime Minister) Leo Varadkar, will host a business development roundtable with leading Irish companies with plans to further invest in the U.S.

An Taoiseach Leo Varadkar said, “Irish investment in the United States is increasing year on year and is now at an all-time high. The scale and diversity of this investment is indicative of the strength of the partnership between our two countries. Ireland has a dynamic and innovation-based enterprise sector, backed by State investment, which is expanding its presence and impact in the US. I look forward to meeting with some of these companies in the coming days and hearing of their plans for the future.”

Julie Sinnamon, CEO, Enterprise Ireland continued this sentiment stating, “Ireland continues to realize its global ambition with each new partnership, innovation, and idea from our entrepreneurial community that we share with the world. Few places is this more evident than here in the United States where the contribution of Irish investment and employment is at an all-time high. Our strategy at Enterprise Ireland is to support this trend with tactical assistance and further investment wherever necessary.”

The roundtable participants will discuss opportunities for Irish companies to continue to expand their U.S. operations, and how the Irish government can support additional investment and growth. Executives in attendance will include Netwatch Group, a provider of live remote monitoring for critical infrastructure security which created 250 new U.S. jobs in 2018 and today announced the creation of 100 new jobs in 2019. Healthcare technology company RelateCare, also announced that it is expanding operations within the U.S. as well as Ireland, creating more than 180 new jobs in 2019. End-to-end IT asset disposal and circular economy leader Wisetek, who have expanded their U.S. base from one to four locations and intends to add two additional locations in 2019.

Other Irish companies in attendance include; Soapbox Labs, a developer of a unique AI and speech technology aimed at addressing childhood illiteracy, partnering with some of the world’s largest technology companies who regularly deploy AI and voice control in their products. Applegreen, a leading provider of service station forecourt retail services with 72 locations across the U.S., the world’s fastest-growing integrated social recognition and continuous performance management platform, WorkHuman, as well as Taxback, a financial technology company enabling more efficient trade for international banks and businesses with a cost-effective solution for sending and receiving foreign currency payments.

In addition to the events in Washington, D.C., and in one of the largest Enterprise Ireland economic missions, more than 110 Enterprise Ireland supported companies are participating in commercial events and meetings across the U.S. during the week of St. Patrick’s Day with the goal of advancing partnerships and driving new business.

“Ireland and the United States have a long history of shared values and a common drive for innovation and entrepreneurship, all resulting in a business-positive environment for our countries”, added Sinnamon. “St. Patrick’s Day is a perfect time to reflect on our mutual success, as we work diligently to continue opportunity and employment growth in the United States.”