The purpose of the Competitive Start Fund (CSF) is to accelerate the growth of start-up companies that have the capacity to succeed in global markets. The fund is designed to enable those companies to reach key technical and commercial milestones.

“In trying to increase the number of female-owned high potential startups, we basically boiled it down to three key things: access to finance, confidence, and a lack of role models or access to networks,” said Sinnamon. By tackling each of these three key issues Enterprise Ireland has been able to increase the proportion of female-owned start-ups in its portfolio from 7% to 22%.

While there is still a lot to do, supporting female entrepreneurship is paying off with continued growth of female-led startups. Here are just a few recent female-led business success examples:

An analytics platform that helps SaaS businesses predict their future performance, enabling them make decisions today to deliver better outcomes tomorrow. Unlike competitors, which can require large amounts of customization and professional services to deliver meaningful business insights, CloudKPI is designed for SaaS companies and is a plug-and-play solution, deployable in just 10 minutes. The Dublin and Silicon Valley-based start-up have been shortlisted for the semi-final of VentureClash 2018, a $5m cash prize global venture challenge for early-stage companies in digital health, financial technology, insurance technology and internet of things.

After launching six years ago with the world’s first 1-Hour false tan, Cocoa Brown has since gained cult-status internationally and even grabbed the attention of Kylie Jenner. Founder Marissa Carter has become widely known for her innovative marketing and new product development as well as her keen ability to detect industry trends. Cocoa Brown products are now sold in almost 15,000 stores around the world, with three bottles of the self-tan being sold every minute.

Jane Gallagher and Roisin Callaghan co-founders of Cogs & Marvel, a Dublin and Silicon Valley based events company with clients such as Google and Twitter, say they are on track for revenues of $28.5 million. Cogs and Marvel grew up alongside the tech industry, producing ever bigger, more innovative events with global tech companies such as LinkedIn, Facebook, Zalando, Uber and HP. They have seen substantial growth over the past two years and are now Ireland’s leading events company with ambitious plans for the next 5 years.

Coroflo has developed a groundbreaking breastfeeding monitor, the Coro, which can accurately measure exactly how much breast milk a baby is consuming. The Coro is the first breastfeeding monitor in the world that can give mothers accurate, precise, and real-time data about milk supply. The company has already received Richard Branson’s seal of approval and raised $1 million in seed funding at a $4.6 million valuation.

“One of the main obstacles to successful breastfeeding is a concern about low supply, with some mothers uncertain about how much milk their baby is getting,” explains Rosanne Longmore, CEO, Coroflo. “We’re using patented technology to develop the world’s first accurate breastfeeding monitor to help overcome the problem and ultimately tackle low breastfeeding rates.”

There are countless apps available to find a date, but what about new friends? GirlCrew has created a unique platform focused on connecting women for friendship and chats. They launched their app in the US this year after raising a seed round of almost $1 million from investors including LinkedIn CEO Jeff Weiner. GirlCrew’s three female co-founders, Elva Carri, Pamela Newenham and Aine Mulloy, are passionate about enabling women to make friends, network in a social and professional capacity, seek advice and share knowledge. 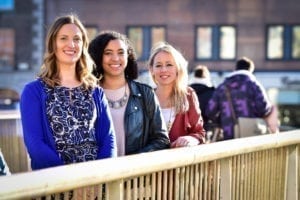 In 2011, Aoife Ní Mhuirí set up eHealth technology company Salaso Health. Passionate about the power of exercise, Salaso believes there is always an exercise that can improve your physical health and wellbeing. In 2017, they built on their existing contract with New York’s largest health care provider Northwell Health to provide online care management services to stroke survivors, and patients with movement disorders and other neurological conditions.  The company’s platform allows patients to use their smartphones or tablets to access and interact with high-definition video exercises prescribed for them by their clinicians.

SoapBox Labs is creating the world’s most accurate and accessible speech technology for children, or in simpler terms ‘Siri for kids’. Earlier this year they secured $2.3m to bring multiple languages into its children’s speech-recognition platform. Founder and CEO Patricia Scanlon grew Soapbox Labs from watching her daughter interact with mobile devices and noticed that the apps lacked accurate speech-recognition capabilities for children.

A smart, intuitive and profession-specific platform enabling pharmacists to systematically record medication-related incidents and risks in practice and carry out effective root-cause analysis. They recently secured $3 million Canadian dollars in investment from from the Canadian Pharmacists Association. “We’re going global with this. There is a huge demand for the platform worldwide and we’re keen to take advantage of it,” Founder and CEO Leonora O’Brien recently told the Irish Times.