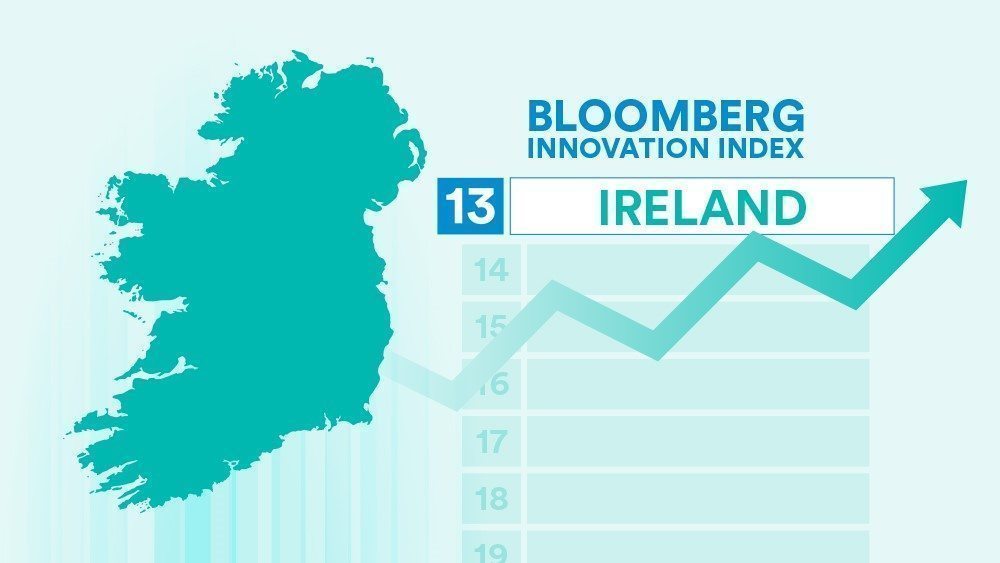 Ireland has moved up three places in the Bloomberg Innovation Index 2018, a list of the world’s most innovative countries. Ireland ranked 13th place overall, with more than 200 economies considered in the Bloomberg Innovation Index 2018 ranking process. Ireland earned first place in subcategories including value-added manufacturing and productivity.

The Bloomberg Innovation Index 2018 also showed a strong performance for European countries, with France and Germany featuring in the top ten. The UK remained in 17th place. South Korea and Sweden retained their top two rankings, with Singapore in third position. The US fell out of the top 10 for the first time in the six years the Index has been published. 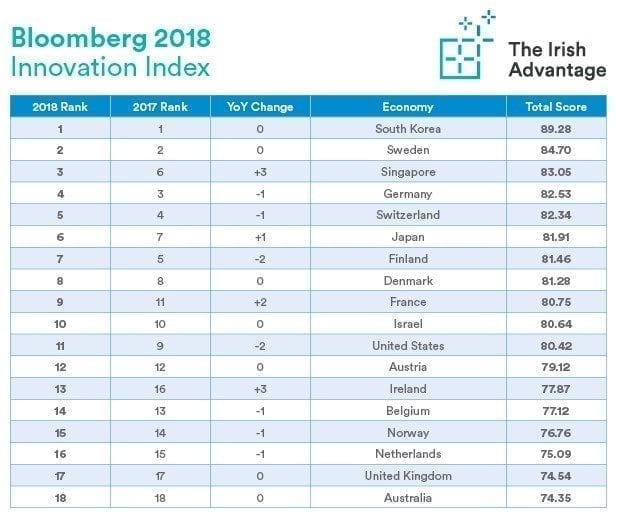 Economies were scored on a 0-100 scale based on seven equally-weighted categories, including research and development spending and the concentration of high-tech public companies. Experts like Robert D Atkinson, President of the Information Technology & Innovation Foundation in Washington DC, attributed the success of rising countries like Ireland to “smart, well-funded innovation policies like better R&D tax incentives, more government funding for research, more funding for technology commercialization initiatives.”

“It’s great to see Ireland inching up the ranking. This year’s performance is consistent with Enterprise Ireland’s own data on how much Irish companies spend on innovation, which has continued to increase since the recession,” said Gearóid Mooney, Divisional Manager for Research and Innovation at Enterprise Ireland, the national export agency. “We are focused on opportunities to drive market-led innovation in support of Irish companies. Research consistently shows that companies that focus on innovation grow more quickly than those that don’t.”

The ranking reflects Ireland’s growing reputation for innovation, a key source of competitive advantage for companies established in the country. In November 2017, Ireland was named first for skills and innovation in the EU Commission’s 2017 Fact Sheet. International customers and partners of Irish companies leverage innovation to increase efficiency and productivity and enhance their product portfolios.

Building on two decades of investment in science and technology, the Irish Government continues to put innovation first with the implementation of its Innovation 2020 strategy.