The Corvus Radar exceeds what is available in the current automotive marketplace in detection range, elevation resolution, and scan area, enabling multiple 3D target detection at up to 300 m over a ±45-degree azimuth angle and ±7-degree elevation angle. 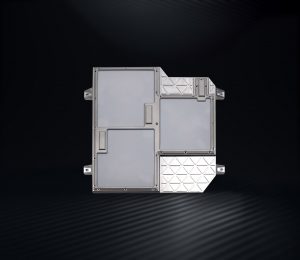 The system utilizes the Arralis Corvus MMIC portfolio and a patented analog beamforming technique to enable detection of a 0 dBm2 target, for instance, a fast approaching motorbike, at 300 m distance. Monopulse is applied in both Azimuth and Elevation planes to enable resolving of targets angle within beams.

“Our extensive experience with all aspects of millimeter-wave system design, from MMICs to beamforming, and from antenna design to system integration, has enabled us to meet a demanding specification”, said Dr. Peter Ludlow, principal engineer on the project with Arralis. “To achieve a higher level of vehicle autonomy the detection of targets at greater distances and in unfavorable weather conditions is essential. We see the Corvus Radar as essential to enabling the safe operation of autonomous vehicles in the most challenging environments.”

Its core focus is in E, K/Ka and W band where it is the world leader at the highly desirable attenuation window of 94GHz, which allows the development of very high-resolution radar; applications of which include autonomous automotive, helicopter landing, satcomms, and massive data rate wireless communications. Arralis products, which are the ultimate in precision and innovation, are used in both global and space environments where accuracy and reliability are critical. Arralis works with some of the world’s largest aerospace, automotive, defense and communications companies.