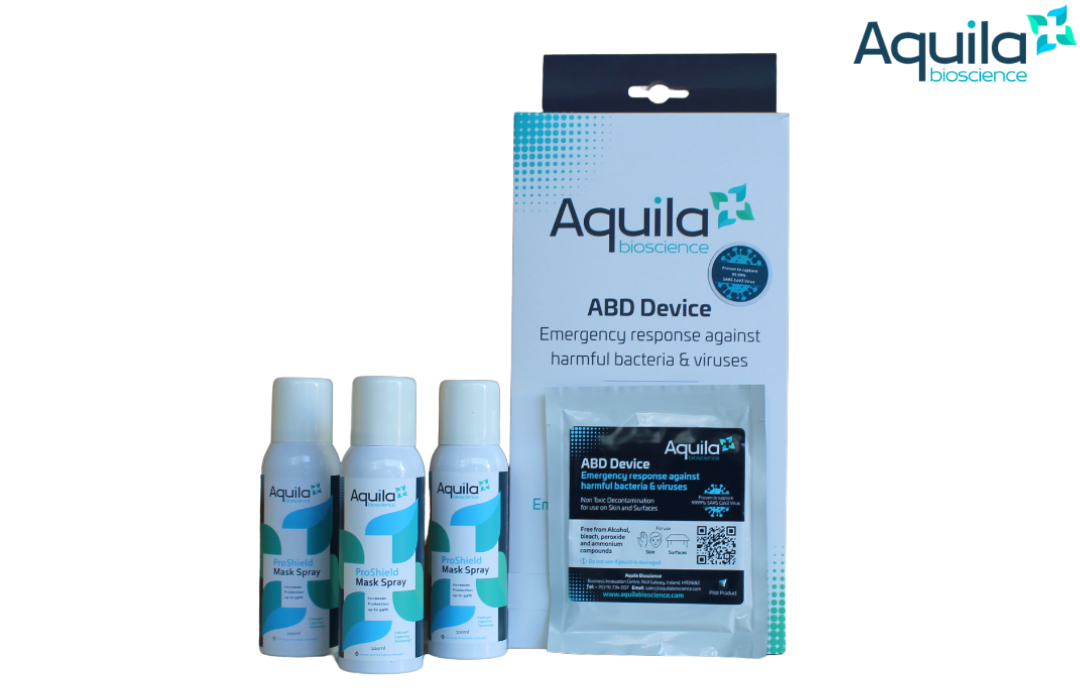 An Irish university spin-out is set to disrupt the global antibacterial and disinfectant industry.

Aquila Bioscience has taken a unique Pathogen Capturing Technology (PCT), which it developed to keep first responders (Civilian/Military) safe from biological warfare and adapted it to help individuals battling the pandemic. The company was set up by Lokesh Joshi, Professor of Glycoscience at National University of Ireland Galway, eight years ago when Ireland’s Defence Forces tasked Prof. Joshi with developing a product that protects the military by countering biological agents and allowed forensic analysis.

At the time military assets globally had no safe way to decontaminate their skin, especially around the face, eyes, nose, and mouth in the event of exposure to hazardous materials such as anthrax or ricin. Professor Joshi, a Biochemist with expertise in proteins and sugars, set to work devising an innovative solution capable of safely disarming some of the world’s most dangerous substances and allowing forensic analysis. He started with the most powerful tool in his arsenal, nature.

Harnessing the power of nature

“Nature protects us every day from microbes we breathe in when we sleep and in foods that we eat. We ingest microbes all the time, but don’t get sick, because nature produces a mechanism against them, similar to the way a mother’s milk protects an infant from gastric flu,” he explains.

Breastmilk, saliva, tears are all just some of the ways nature protects us on a daily basis. Yet, despite advances in science having given us a clearer understanding of how such substances work, toxic chemicals remain our reflexive response when dealing with contaminants.

“The materials we use today to disinfectant and decontaminate are 100 years old, the same as they were during WWII. All we are doing is using horrible chemicals – such as ammonia, chlorine or alcohol – to try and keep us safe,” he says.
These ingredients work by destroying or burning cells, which is why they can lead to dry skin, dermatitis or asthma, as well as much more serious conditions. “If you used them on a houseplant, it wouldn’t last a week,” he points out.

The US Food and Drugs Administration was already planning to restrict the use of compounds containing these poisons prior to Covid. Unfortunately, when the pandemic arrived the use of these toxic chemicals grew exponentially in the form of hand sanitizers. “We are living in the 21st century. We needed to think differently,” says Joshi. “We needed an alternative that is safe for ourselves, and safe for the environment.”

Working in conjunction with the Defence Forces Ireland and the Czech University of Defence, Joshi and his team developed innovative Pathogen Capturing Technology, which, when applied to a mainly biodegradable cotton wipe, safely removes microbes using nano-scale hooks that simply lift them off our skin, before securely trapping them. “The Achilles’ heel of any bioagent or pathogen is that it has to attach to something. That’s why our technology is so simple, yet so disruptive,” he explains.

Called Anti Bioagent Decontamination (ABD) Device, it represents a step-change in the way the world approaches biohazards, allowing for the use of mechanical action rather than toxic chemicals to sanitize skin. Aquila Bioscience’s patented solution uses millions of decoys that bind to pathogen stickers, disabling the pathogen. COVID saw the company pivot to provide a consumer version, supported by funding from the prestigious European Innovation Council.

Better than the best

Independent testing from NeoVirTech, a French Laboratory, shows it can capture and remove up to 99.99% of SARS-CoV-2 from human skin. That means the technology is equally if not more effective than the highest performing chemical-based methods currently on the market – without any of the environmental or health problems.

The company has now developed a second product based on its signature technology.

The ProShield Mask Spray is designed to be sprayed by the user onto a reusable cloth mask daily. Once there, it captures and neutralizes harmful pathogens on the outside of the mask, until it is washed, and the pathogens are then destroyed.

Currently billions of used disposable masks are clogging up not just landfills but rivers and roadsides worldwide. “This isn’t just a health crisis, it’s a climate crisis we are creating for generations to come,” says Joshi.

Aquila Bioscience’s technology, whether in wipe or spray form, is effective against a full range of viruses, bacterias, and fungal pathogens.

The company is working with distributors worldwide. It is gaining particular traction in the US, where the ABD Device is approved as an FDA-regulated mechanical device. In all countries where vaccine rollouts are continuing apace, employers are sensitive to their duty of care for staff returning to the office. Many have corporate and social responsibility policies that also commit them to protect the environment.

As the race between vaccines and variants intensifies, Aquila Bioscience’s products can help, because it works equally well across all new variants. It has a range of further applications too, from hospital infections to acne to animal disease management and wound management.

“We are in the 21st century yet prior to our technology there was nothing on the market that a person could use on their face to remove pathogens. Almost everything you can think of says on the label to keep away from eyes, nose, and mouth. By contrast, our disruptive, out-of-the-box technology offers efficient, safe, and environmentally friendly protection from biological pathogens,” says Joshi. “That’s because we work with nature, not against it.”

Aquila Bioscience’s Pathogen Capturing Technology is and will continue to save lives.

Building Partnerships for a Resilient, Transparent Healthcare Supply Chain Network Between North America, Ireland and Beyond